All bars are not created equally, and we’re here to answer all of your burning barbell questions like, “How long is a barbell?” and “How much does a bar weigh?” and “Why are there different barbell types, anyway?”

Standard and Olympic bars are quite different from each other because they’re used for different purposes, which we’ll break down for new and experienced lifters below.

Weight of the Bar

If you pick up a standard bar and an Olympic bar, one of the biggest things you’ll notice between the two is the difference in weight between the two bars. Typically, a standard bar weight can be anywhere between 13 to 19 pounds. Olympic bars have some variation in their weight, with the women’s bars usually coming in at 15kg/33 pounds and men’s bars at 20kg/44 pounds. The men’s bars are also longer and thicker than the women’s, which will obviously make them heavier.

There’s a couple of reasons why the Olympic bar is going to be more than double the weight of the standard bar, not the least of which is that Olympic bars feature sleeves on the end of the bar that adds additional pounds.

Variations in material also contribute to that weight differential, and that is by design. Olympic bars are able to handle much more weight than a standard bar. 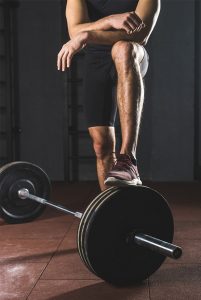 Strength of the Bar

Due to that lower standard barbell weight, they will begin to flex with around 200 pounds of weight on them, whereas Olympic bars can take much greater amounts of weight. Standard barbells can even become permanently bent if you’re consistently loading them close to those max capacities, and doing exercises with a bent bar can lead be dangerous for the lifter. However, if you’re not looking to lift that much weight, a standard bar could be plenty strong enough for what you need.

Olympic bars can take a lot more weight, and while the exact amount will vary from bar to bar, they can generally withstand about 500 pounds of weight, which is why you’ve most likely used an Olympic barbell at a commercial gym since they’re much more versatile in that setting.

The bar ends or sleeves also make Olympic bars much more versatile and safe in a gym setting. While standard barbells only have a small collar on either side to keep the plates from sliding into the middle of the bar while you’re lifting, Olympic bars have fairly hefty sleeves on either end. The sleeves aren’t cosmetic, even though they do add a very cool look to the bar.

In fact, they are a safety mechanism that helps new and experienced lifters alike. By having those weighted sleeves on either side, the bar is a lot more stable on the rack when you’re loading plates onto the sides. With a standard bar, it’s easier for the bar to tip to one side while you’re loading it up which can damage the weights, the floor, and the lifter. The sleeves act as a counterbalance which makes this occurrence a lot less likely.

But more than that, the sleeves on the Olympic bars rotate. This allows the plates to spin freely as you move the weights from the floor, which reduces the torque on the lifter’s body and can help reduce injury. Remember that with those Olympic bars, you’re likely going to be moving a lot more weight, so decreasing that impact force is critical. And even if you’re not moving weights where it would make a difference just yet, practicing good lifting form while getting used to the sensation of the plates spinning will help when you do get there.

The mechanism that makes the sleeves rotate is one of two types: bushing or bearing. A bushing is a tried-and-true mechanical sleeve that reduces friction between two surfaces, and they tend to take less upkeep because they’re made of self-lubricating materials. The bushing is threaded onto the shaft of the bar to the collar, and another is added onto the end. Then the sleeve is put onto the bar, over those bushings, and the bronze sleeve of the bushing allows for rotation. Bushing barbells do tend to spin more slowly than bearing sleeves, but that isn’t necessarily a bad thing.

Bushings are more suited for powerlifting movement, whereas the faster spin of the bearing sleeve is more suited to Olympic lifts (clean and jerk, snatch). Most barbells feature needle bearings, which feature dozens of small tubes (similarly shaped to needles, hence the name) that rotate inside the mechanism that’s placed between the shaft of the bar and the sleeve. This contributes to more rotational force, which translates to a faster spin.

When you’re looking at a standard bar, you can expect it to be a 1-inch barbell from end to end, with the exception of the collars. Olympic barbells are about the same diameter in the section where the lifter grabs, with some slight variation between the men’s and women’s Olympic bars (1.1 inch vs 0.98 inches, respectively). So for the lifter, you’ll have roughly the same diameter to grab onto whether you’re using a standard or Olympic bar.

The reason that diameter is important when looking at standard and Olympic bars has to do with the type of weights you buy. The sleeves on the ends of Olympic barbells have a 2-inch diameter, so the hole in the weight plate has to be large enough to accommodate that diameter. For this reason, weight plates are not interchangeable. Those suited for a standard bar will need to have a 1-inch diameter, which is half of the Olympic plates.

More On Olympic vs. Standard Plates

1-inch plates tend to have a simpler look and are rounder and flatter, which is why they’re sometimes called pancake plates. Olympic plates have more squared-off edges, and they tend to be color-coded and coated in rubber. This is to help protect the weights and the floor if they’re dropped, and these rubberized plates are sometimes called bumper plates.

But if you’re looking into Olympic weights, you may notice that in addition to the 2-inch hole in the center, there are additional holes around the edges to help lifters grip them as they load them onto the bars. They also have the added benefit of allowing lifters to use just the weight itself to do some exercises. 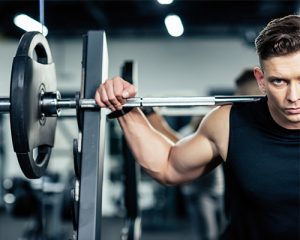 Watch Out For Bad Olympic Weights

Even in the realm of Olympic weights, there are quality variations. One of the biggest to look out for is the diameter size of the hole in the weight plate. Olympic bars themselves are 50 millimeters in diameter, and good quality Olympic plates are ever-so-slightly larger than that, usually 50.4mm or 50.8mm. This allows for a snug fit when you push the plates onto the end of the bar.

However, some manufacturers make weight plates with larger holes than that, which leads to a wiggly fit that can be annoying or downright dangerous. So take care to buy weights and bars from reputable brands that will provide the most enjoyable and safe weightlifting experience.

Deciding on barbell length is dependent on a variety of factors. Having a bar that is too long for what you need will be unwieldy, but if you’re keeping your bar on a power rack, your bar needs to be long enough to fit on the hooks safely. Olympic men’s bars are set at 7 feet, 2 inches long, and Olympic women’s bars are 6 feet, 6 inches long, so either Olympic bar length should fit in the rack just fine. But if you’re picking a standard bar, which can vary from 5 feet to 7 feet, definitely make sure you take this into account.

Lifters step up to, lay down under, or pick up the bar from the ground, and hand placement and stance are very personal to a lifter. Having the appropriate length of bar to your body is going to give you the best options for where to put your hands to suit your own physiology.

Standard bars and their accompanying weight sets are going to be more cost-effective because of the build quality and the cost to ship. If you are looking at Olympic bars, sleeves with bushings are going to be cheaper overall than Olympic bars with needle bearings. Standard plates themselves are also cheaper than Olympic plates, just because they don’t have as many bells and whistles. While cost is of course going to be a consideration, if you’re serious about lifting and planning to continue making progress, it may be worth making a larger upfront investment so that you don’t have to pay for replacements later.

Although the straight bars are the only ones used in competitions, there are a few different types of specialty bars that may help lifters isolate different muscles or bring in different strength elements to their training. These bars usually only come with the Olympic diameter sleeves on the end, so they will only accommodate the Olympic plates.

Great examples lifters may want to use in their training are multi-grip bars, trap bars where the lifter stands inside of the bar itself to do things like deadlifts or farmer walks, bars designed specifically for curls, and safety squat racks, which can protect lifters when they’re increasing their squat weights.

Once you’ve invested in a bar and the Olympic weight plates to go along with it, you’re likely not going to want to just chuck them on the floor in a big pile. A simple storage solution is a weight tree, which is an A-frame structure that has prongs on either side that match the diameter of your weight plates.

A weight tree is a good solution to keep your weights organized and undamaged since you can arrange them by weight and size. Not only will this help with the overall neatness of your space, but it will also help you to change or add plates as you need them throughout your workout, streamlining the process for you and leading to more gains.

How to Pick a Good Barbell

This is a personal decision that comes down to a handful of factors. Cost is certainly a consideration, but it may be worth delaying your purchase in order to save up for a more premium product.

What type of lifts do you want to do? And are you interested in those specialty bars we mentioned? Another consideration is, of course, what are you used to? Olympic barbells are more common in places where you have likely worked out before, like your local gym, your college gym, or even places like Crossfit gyms.

Once you’ve decided on those things, it’s important to pick a bar that feels comfortable in your hand, a barbell length that suits your height, and a bar that fits your budget.

Buyer’s Guide: Buying A Bench Press For Your Home Gym In Montreal

Considering Setting Up a Home Gym in Montreal?

Dumbbells, Barbells and Kettlebells: The Best Choice for Your Home Gym in Montreal

Your coupon code is valid for